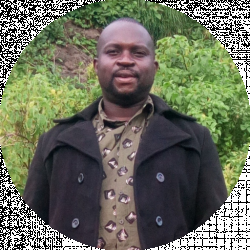 Haron Omaita
Certified Tree Surgeon at Arbor Facts
There’s nothing Haron loves more than trees. If he could find a way to grow a live tree in the center of his home, he would. He’s amazed at how long trees live and how they’re able to survive so much. When he isn’t writing about trees, he’s tending to his own personal garden and trees.

The boxwood tree (Buxus Sempervirens) is an evergreen dense shrub that’s typically planted in formal and stylish landscapes. Boxwood comes in many varieties and cultivars and is grown mainly for foliage because it has inconspicuous flowers.

Different boxwood species grow all over the world, but none naturally grow in the US. Most species grow in subtropical and tropical regions, so they don’t usually tolerate winter seasons. The European boxwood tolerates cold winters better than other species and is the most commonly grown.

Having boxwood shrubs in your landscape lets you create a matching order, a formal hedge, or a couple of boxwood shrubs to strike a balance in any entryway. Boxwood shrubs can also be grown as foundation plantings or focal points.

The boxwood tree is a versatile landscaping shrub that works best as a hedge, specimen plant, or foundation planting in both formal and casual gardens. Boxwood can grow in USDA hardiness zones 5 through 9, reaching 2 to 8 feet tall.

Native to Europe, Central and South America, Caribbean Islands, Asia, and Africa, boxwood prefers partial shade and full sun and thrives in loamy well-drained soils. It grows slowly and blooms during the spring.

Originating in Europe, Central and South America, Mexico, the Caribbean, Africa, and Asia, boxwood shrubs belong to the Buxaceae (box) family. Known for their green leaves all year round, boxwood shrubs flourish best in USDA hardiness zones 5 to 9.

Boxwood shrubs (Buxus Sempervirens) prefer partial shade and some “time alone”. The only care they actually need is pruning during the summer and spring to help stimulate growth. The most widely grown boxwood species in landscapes are the English boxwood, American boxwood, Korean boxwood, and Japanese boxwood.

Boxwood blends in well with everything from vegetables to herbs to flowers, making it ideal for foundation planting on yard beds. Also, since boxwood shrubs can grow up to 8 feet tall, they’re also a great choice for privacy hedges. With their slow rate of growth, however, it might take several years for them to mature.

Of course, boxwood’s versatility is what makes the shrub such a favorite for many homeowners. Apart from garden borders and hedges, boxwood shrubs also make excellent walkways edges, potted topiaries, and stand-alone statement pieces. Whichever way they’re planted, boxwood shrubs will add an air of charm and elegance to your yard. 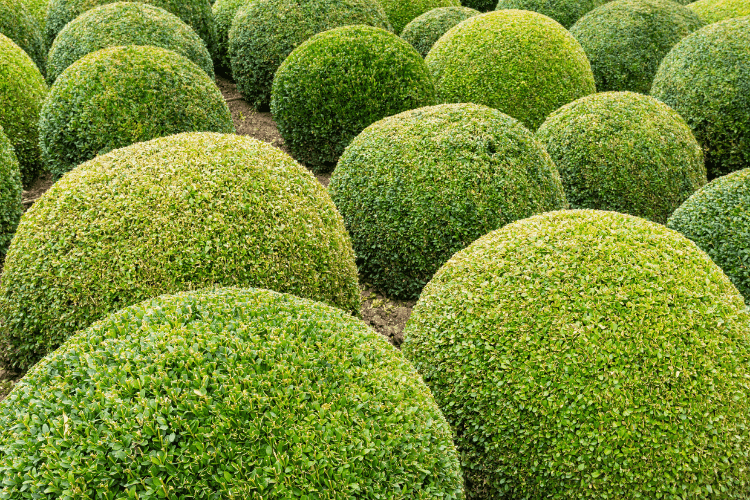 Many types of boxwood shrubs exist, and the right plant for your home’s landscape depends on your specific needs.

Sempervirens “suffruticosa” (English boxwood) is the most widely grown cultivar in the United States, having been first grown in the early 1700s. It can grow up to 3 feet tall and typically grows around an inch every year.

The English boxwood’s overall shape resembles a cloud. It’s an evergreen plant that blooms in the spring.

This shrub is evergreen, slightly blooms in the spring, and is extremely resistant to cold weather, which makes it a good option for colder northern regions of the United States. The leaves are dark green and waxy, with pale undersides. 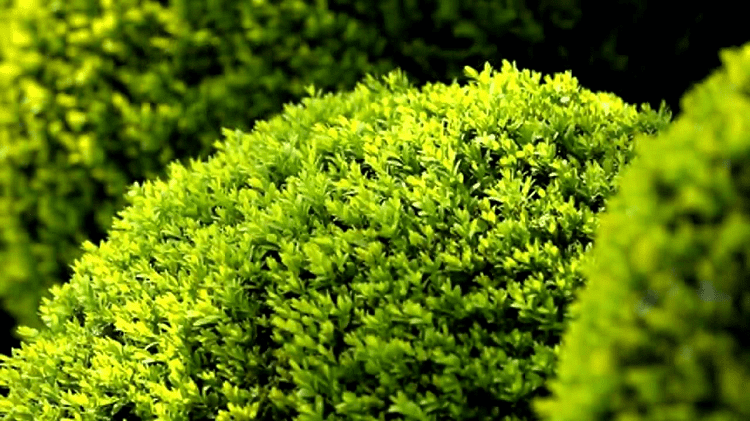 Japanese boxwood is one of the most versatile boxwood species around. If grown in the right environment, it can reach a height of 8 feet and a spread of around 6 feet.

Japanese boxwood has dark green leaves and grows to a length of around 1 inch. It’s an evergreen species, but the leaves may acquire a brown or yellow tinge in cooler climates. Widely planted as a short hedge, it creates a great border when well cared for. Its inconspicuous flowers appear in April.

Korean boxwood is planted in an open manner instead of the dense shrubbery common in other boxwood species. This increases the light that penetrates the inner parts of the plant and also the circulation, making it resist disease better.

Korean boxwood is winter-resistant, but the leaves may turn brown when temperatures are extremely low. However, the leaves will go back to green in the spring and the shrub will resume its growth as normal. Korean boxwood develops oval-shaped leaves that typically grow to only around 0.5 inch in length. In the spring, the flowers are tiny and yellow or green. This boxwood shrub grows to a height of around 4 feet. 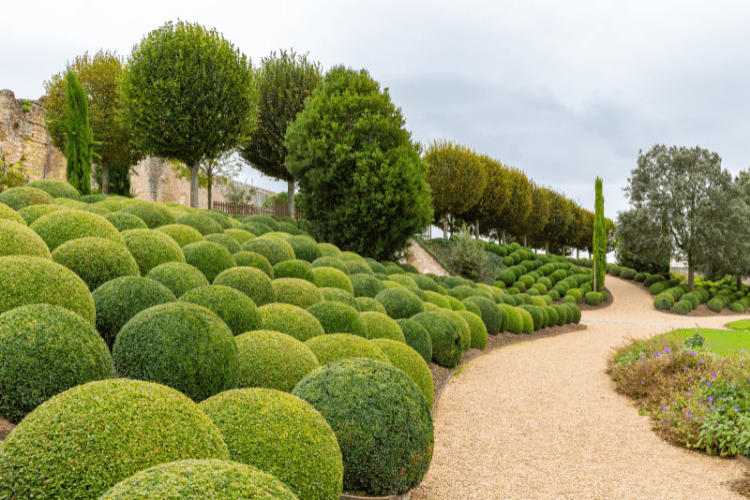 The best way to propagate boxwood is to root several stem cuttings.

While growing boxwood from seed takes quite some time, it’s more often than not successful. 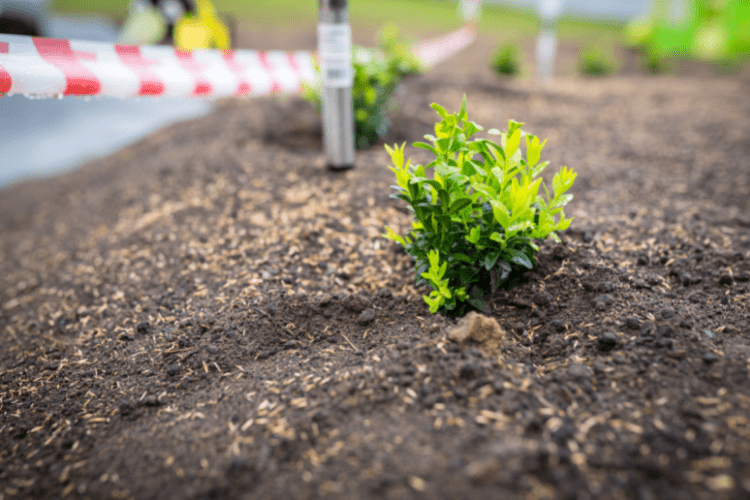 Boxwood thrives best in loam soil in partial shade or full sunlight conditions, preferably in a place slightly sheltered from wind. Boxwood shrubs have shallow roots, so you must protect the soil from the heat. Keep a 3-inch layer of organic mulch around each plant.

Begin mulching about 2 inches from the trunk—it’s generally bad to mulch too close to the trunk because it invites diseases and pests. Mulch to around 1 foot around the entire circumference as long as space allows.

When planted as a formal screen or hedge, regular pruning will be the main maintenance practice for boxwood shrubs, though this won’t be necessary if you’re growing them as sample plants.

Boxwood shrubs need well-drained soil; otherwise, they’ll develop root rot. Although the shrubs can withstand soils with lower pH values, they prefer soil within a pH range of 6.8 to 7.5.

In the first couple of years, boxwood shrubs require deep watering on a weekly basis. Avoid shallow watering as it won’t get into the deepest roots. Grown boxwood shrubs will flourish with deep irrigation every 2-4 weeks.

Boxwood shrubs can grow in partial shade or full sun, but it’s preferable to plant them in a location covered with dappled shade during the hottest period of the afternoon. When growing under the shade of trees, dwarf boxwoods’ roots will benefit from the lower soil temperatures.

Boxwoods usually flourish in climatic conditions found in USDA zones 5 through 9. In extremely hot summer weather, more shade and water will benefit the shrubs. In the USDA zone 5, gardeners may notice their trunk tips dying back during cold weather. 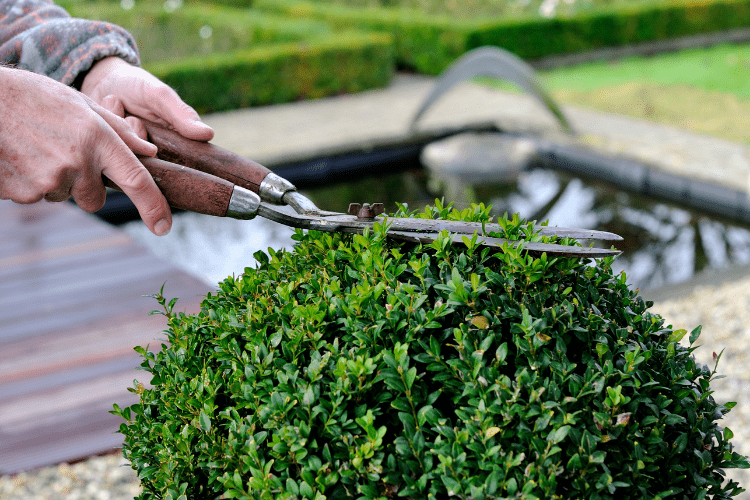 Although boxwood shrubs are known to tolerate extensive pruning, most species will develop an amazing informal shape with minimal pruning, if at all. Boxwood shrubs only require occasional pruning to get rid of tangled or dead branches.

When pruning extensively for shape, you can do the trimming at almost any time in the growing season, but avoid it in late fall to prevent winter bronzing.

New boxwood growth is likely to get damaged in the northern section of the USDA hardiness range. Protect your boxwood with some burlap wrapping or its equivalent during the first few years.

Boxwood Shrub Problems and Their Solutions 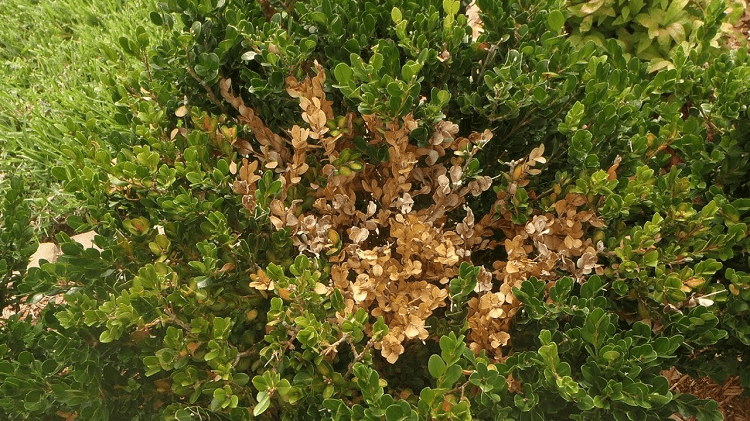 Common boxwood pests include boxwood mite, boxwood psyllid, and leaf miner. These cause disfiguring damage, instead of a fatal one, and you can get rid of them with horticultural oils.

Nematodes are a major concern in the Deep South. Boxwood shrubs can be vulnerable to leaf spot and fungal blights, and poorly drained soils can cause root rot.

Winter bronzing is a common boxwood problem. It’s characterized by a change to yellowish or reddish-brown leaf color resulting from winter exposure to the sun and wind.

Spraying the shrubs with an anti-desiccant in late November as well as late January is one way to fix this issue. You can also ensure that your boxwood plants are sufficiently watered all through the growing season.

Moreover, you can erect a structure around the boxwood shrubs to protect them from the sun and wind during the winter. However, some homeowners don’t mind—or actually even appreciate— winter bronzing on their boxwood shrubs.

Answer: Primarily grown for their leaves that grow in opposite directions, boxwood shrubs are lance-shaped to virtually rounded and have a leathery texture. Many boast darker blue-green leaves, some feature variegated leaves, and others are paler green.

Question: Is Boxwood Considered a Shrub or Tree?

Answer: Boxwood is more of a shrub than a tree. It can be an excellent addition to any yard or garden and can grow to reach almost 4 feet tall.

Question: How Tall Does Boxwood Grow?

Answer: At maturity, the common boxwood (American boxwood) grows up to 15 to 20 feet high with a width of 15 to 20 feet.

Question: How Quickly Does Boxwood Grow?

Answer: In general, boxwood grows very slowly at 6 inches or under per year. Boxwoods typically have slow, medium, or fast growth rates—but remember that even fast-growing boxwood varieties grow quite slowly compared to other landscaping shrubs.

Question: Do Boxwoods Prefer Shade or the Sun?

Answer: Boxwoods generally prefer growing in partial shade, for example, a few hours of sunshine during the morning or afternoon or the dappled light piercing through overhanging foliage. Some varieties will withstand heavy shade.

The Takeaway on Boxwood Tree Guide

The boxwood shrub is one of the most adaptable plants around. It can give your lawn a touch of texture and class, and also accentuate your existing features. Boxwood shrubs come in different sizes and shapes and are some of the most sought-after shrubs by lawn care enthusiasts.

Boxwood is an evergreen, slow-growing shrub that can liven up your landscaping even as other foliage goes dormant during the winter. This shrub is low-maintenance, too, and can increase your curb appeal all by itself.

Since boxwood shrubs are slow-growing landscaping plants, they are highly coveted and therefore expensive. Before planting boxwood, be sure to carefully choose your location. Remember to mulch and water them well for a vibrant, long lifespan.